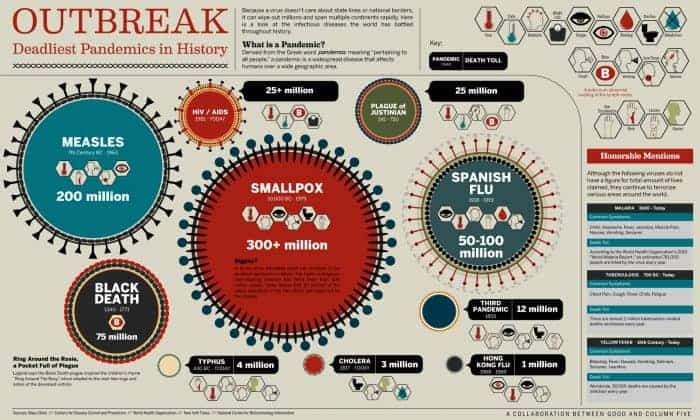 The human species has been battling Nature's population control Â since the caveman days. Â Apart from natural disasters, this has been the job of pandemics and diseases throughout history. Below are some of the most notable of theseÂ occurrences.

But hey Nature, weâ??re still here! Killinâ?? you right back!

Speaking of the human condition, I must say Iâ??m disappointed to see that obesityÂ didnâ??tÂ even make the honorable mention list! Researchers have even been as bold to say thatÂ this fat-splosion is as big a threat as bird flu and global warming.

Itâ??s not nearly as poetic an ending as the Black Death, but we may see the day where itâ??s taken just as seriously.

Scary? Not as much as the scale of HIV/AIDS at this point in timeâ?¦ If you look at theÂ infographic, youâ??ll see that itâ??s as historic a plague as the Black Death, claiming 25 million victims up to this point, with doubtless scores more to follow.

Hold on, there is a ray of hope yet!Â The US AIDS Chief says the â??tipping pointâ? is in sight. Boy, Iâ??d like to think heâ??s right.