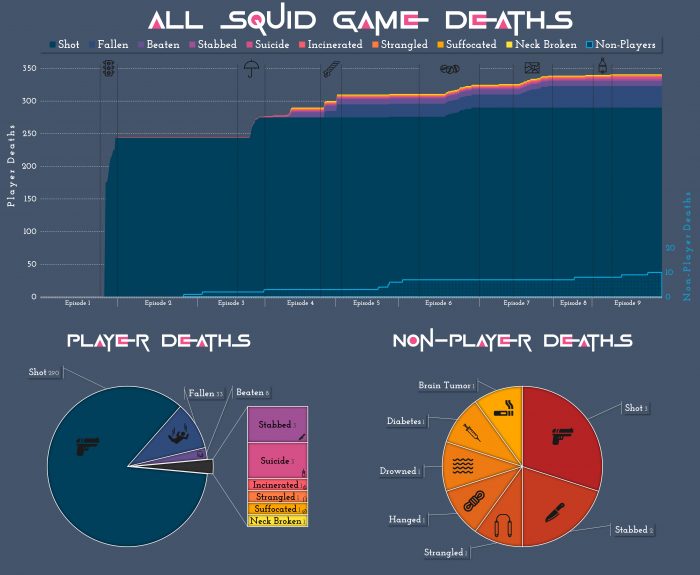 Squid Game is a new Netflix series that is taking the world by storm. The intrigue, mystery, and brutality are what so many are finding compelling about the Korean TV series. WARNING – This graphic may contain spoilers!

Squid Game hit Netflix in mid September and immediately hooked a large portion of subscribers. The premise of the show is that a desperate and indebted group of South Koreans are tricked into playing in a deadly contest for a lot of money. The prize is awarded to the person that survives, and money is added to the prize pool each time someone is killed.

A sinister twist is added to the game. As soon as a majority of the players decide to end the game, they are all free to leave. The game immediately ends and everyone who remains survives… but no one gets the money.

This infographic visually shows every death in the show.

How Many People Died In Squid Game?

As you can see on the graphic, the total number of deaths is 341.

The most common cause of death is gunshot with a majority of these coming in the very first game the contestants play. Over half the deaths occur in the very first episode of the series. This makes a statement and sets the stage for the brutality to follow.

Each of the games in Squid Game is based on a children’s game. This adds to the stress level because all of the contestants are familiar with the obstacles they face in each round.

It’s no question that Netflix has delivered another successful show to it’s audience in it’s continued dominance over cable.

This infographic was sourced from reddit and was created by user /u/JustALittleWolf.