Buy in large and bulk retailers seem to be in style these days. Wal-Mart is no exception. I've heard stories of protest over one company joining the local economic circle being protested. One of these companies is Wal-Mart.

For support of mom and pop shops, Wal-Mart's openings have been disputed in many areas. Some feel they are just what the government ordered, while others have praised their opening. When I lived in Louisiana, the opening of a local Wal-Mart meant things were on the up and up. Business was booming and if a Wal-Mart was suggested, it meant that all your economic numbers were on the increase. But over the years and across state borders, this outlook has changed.

Many see the opening of a Wal-Mart as the end of all business. Local family owned industries were looked at as if they were set to be closed and Wal-Mart was the reason to blame. But upon further analysis of the infographic below, it made me wonder whether or not Wal-Mart should be praised or scowled at.

One of Americaâ??s own is the leader a major leader in revenue, sales, and manpower. Wal-Mart, in some ways, embodies that American dream better than any other company known to man. Should we hate it or embrace. Share your thoughts. [Via] 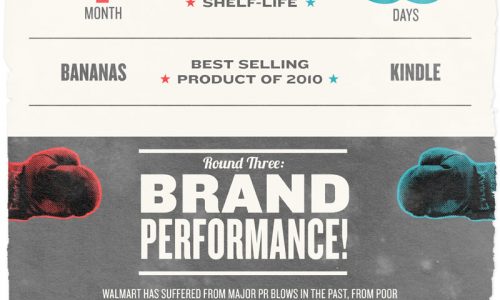