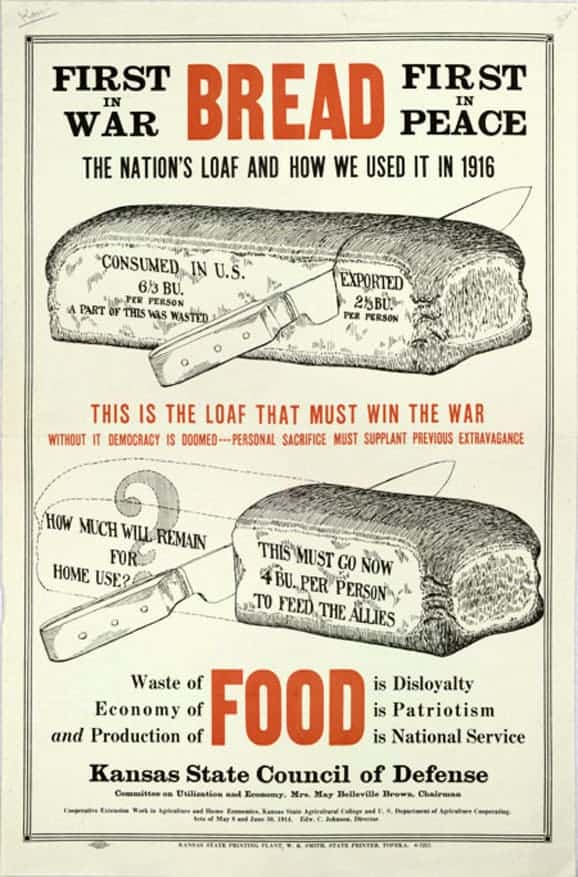 The Gritty Reality Behind Bread Rationing

So, I'm kind of a history buff. I don't read out of history books or anything that extreme, but I do have an interest in what has happened in the past. This infographic could be older than your grandma, or maybe even your grandma's pet tortoise (named Shelly? Voldetort? Lil' Buddy?)

Although the information in this graphic isn't really of interest to you today, have some respect for the designers of the early 20th century. The graphic does paint a sobering picture for those alive in 1917. With almost half of the nation's bread supply being shipped off to the allies, our ancestors all had to become bakers. The poster does get a little intense.

“Without it, Democracy is doomed.”

The ‘it' in that sentence is a loaf of bread. Yes, Democracy's main pillar of support is wheat and an oven. Why are we sending troops to the middle east when we could just send bakers? In reality, our ancestors had it tough and had to make do with what they did have during rationing. Even stale bread had to be repurposed into something edible to keep from wasting their small amount of allotted food.

Check out today's infographic for a peek into the life of your grandparents and our ancestors. Then, maybe go appreciate that loaf of Wonder bread sitting in your kitchen by making a tasty PB & J.

Tim
Co-Founder
After a quick stint in Baton Rouge, Louisiana, Tim moved to Austin, Texas at the ripe age of one. He then spent the next 17 years there experiencing all that Austin had to offer. Nightlife, music, ...
1k