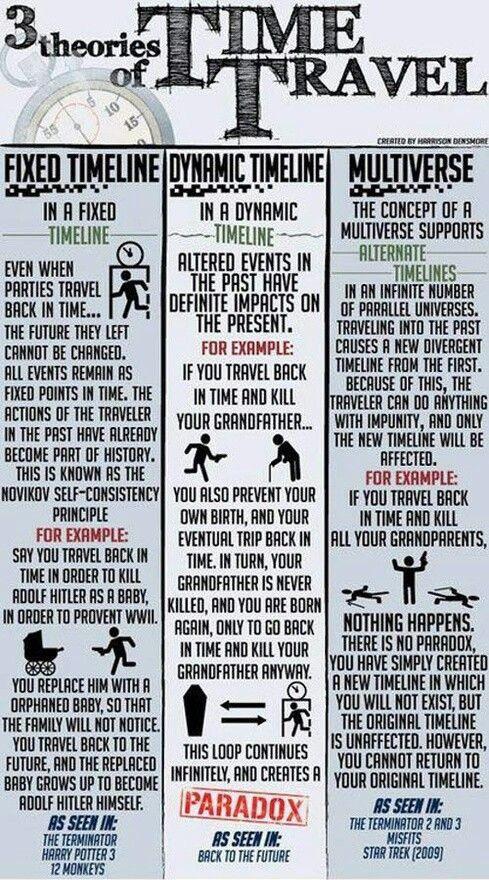 Time travel is one of those things that seems like it should be possible. After all, it’s been a plot device in countless works of fiction and pop culture. But serious physicists have never been able to come up with a way to do it. These theories explain why we’re not zipping around through time as much as we’d like to—and why you shouldn’t get your hopes up about ever going on a Star Trek-style adventure through history.

The Fixed Timeline is the theory of time travel where you can only travel to a point in your own future. It’s like time is like a train track and everything that happens has always happened and will always happen. The train cannot go backwards, it cannot go off the track and if you’re on the train you can only move forward with it. This means that if we were to travel back in time then our actions would already have been done before they could even happen in front of us again! This theory also suggests that there are parallel universes out there where every single event that ever happened or will ever happen has already happened somewhere else (and probably more than once).

The multiverse theory, also known as the many-worlds interpretation (MWI), is a theory that states that our universe is just one of many universes. In this model, all possible alternative histories and futures actually exist; it’s just that we can’t see most of them. The MWI suggests that time travel is possible because we are constantly traveling through time—just in different directions than we normally experience in our everyday lives. The MWI has its roots in quantum mechanics, where it was first developed by Hugh Everett III during his PhD work at Princeton University. Basically, according to this theory you could go back in time if there were infinite universes: You’d simply hop across one of these other universes—and therefore a different timeline—when you tried to change something about your life or world line. It sounds confusing but it makes sense when explained more clearly:

Time travel is possible. You’ve probably heard of three different theories about time travel: the fixed timeline, dynamic timeline and multiverse. The first theory is that time travel isn’t possible. The second theory states that it is possible, but only in one direction (from future to past). The third says you can go back and forth between past and future in both directions. In the end, I think we’re going to have to accept that time travel is possible in some form. Whether it’s in the future or right now, the question isn’t whether there are people who can get around through time. It’s how they do it and why we haven’t seen them yet. They may have been there all along without us noticing—or maybe they’re still working on figuring out their own theories about what time really means in order for us humans (and our brains) to understand!