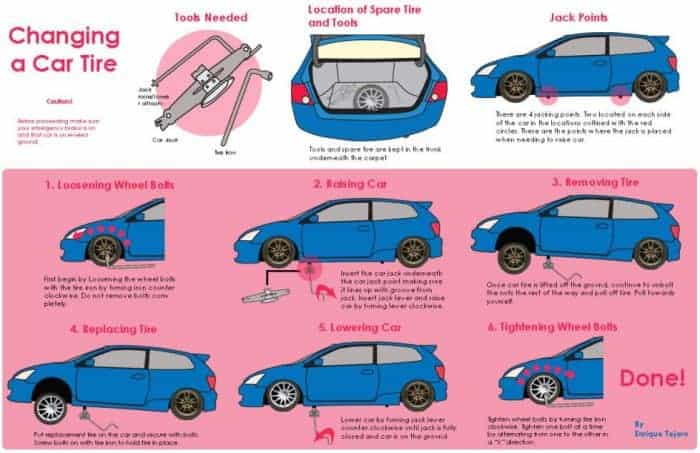 Have you ever found yourself stranded with a flat tire? This infographic provides you with everything you need followed by six easy steps. Beginning with how to raise your car, to the point when you are ready to drive off again. Well, not having much more to say on tires I will tell you a short story.

When I was a young boy, I was the neighbor to two of the most interesting people in history. When the moon didn't rise, these overachievers would space fly to the sphere of cheese and lift the darkness from it's face. They telepathically transmit adrenaline to weaker individuals to give them the balls to win a fight. On my 14th birthday everything changed. My neighbors were no longer around and the world started to retreat into anarchy.

Never had i seen so much chaos, no longer was our world ours. We had become the slaves. Little did we know that we were not the only intelligent species in our universe, much less that this adrenaline my neighbors had been capable of making is the one thing that unites the universe. There are people within every species who are able to unlock all the powers of adrenaline. Every species has a unique ability it gets from the adrenaline, but those gifted like my neighbors and me are able to do more. They had found my talent and had been training me for years. In the past everyone lived in harmony, but when normals learned they could harvest us to increase their own abilities we became prey. At first we could fight them off, but their technology got better and we had to go into hiding.

I'd spent the better part of that solemn summer playing drunk Risk with my Uncle Larry. After congress voted to reintegrate with the Brits, the normals calmed down. Us fellow adrenaline manipulators such as my: neighbors, Uncle Larry, were introduced to the aristocracy of the English. It seemed as if peace had settled through our land once again. But a dark tide was rising to the East…[via]

15 Examples Of The Most Cringey Office Jargon