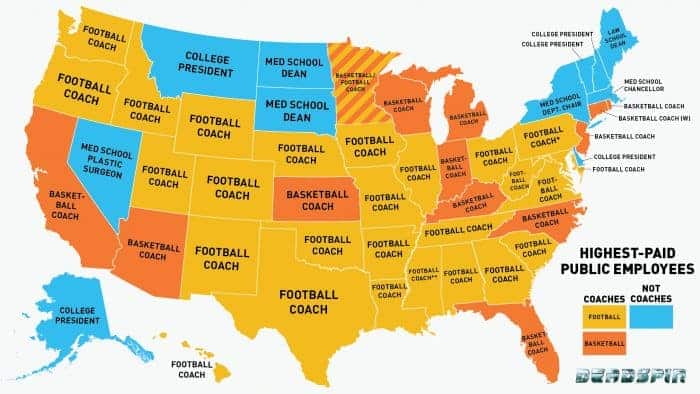 Is Your State’s Highest Paid Employee A Football Coach? (Probably)

Coming from Texas, I grew up knowing that football was important to a lot of people. Being a musician and member of the school marching band, half of the school year was dedicated to following around our team. Although an art has been made from the marching band show (mostly thanks to DCI) it regardlessly stemmed from the obsession of giving importance to football in our culture. So it's well understood that our state would invest a lot of money into college football. Texas, however, is not the only one.

Deadspin has put together a great infographic that shows what each state's highest paid employee is. Surprise surprise, there is an overwhelming number of coaches on this list (basketball and football mostly). Only 11 states don't have a coach as their top-paid employee. Are my tax dollars paying these coaches? Probably not. Most of the money they get comes from the money that the team generates. So what's the problem then? According to Reuben Fischer-Baum there are at least three: First of all, coaches don't generate all of the revenue, the team does. So why should just the coach get paid so much more if it's a team effort? Secondly, coaches don't need to be paid that much to be profitable. Mack Brown (paid 5 million/year) coached a mediocre 8-5 team to the Holiday Bowl and generated $103.8 million dollars! Thirdly and most importantly, most of these funds generated don't actually go back into the schools that they play for (mostly they go back into the sports program itself).

If you would like to read more about this, the source article at Deadspin has a lot of great commentary on this issue (just click the via link below). Don't get me wrong, I love me some football but this is kind of ridiculous.