World’s Most Expensive Auction: Picasso, Mclaren & The US Constitution 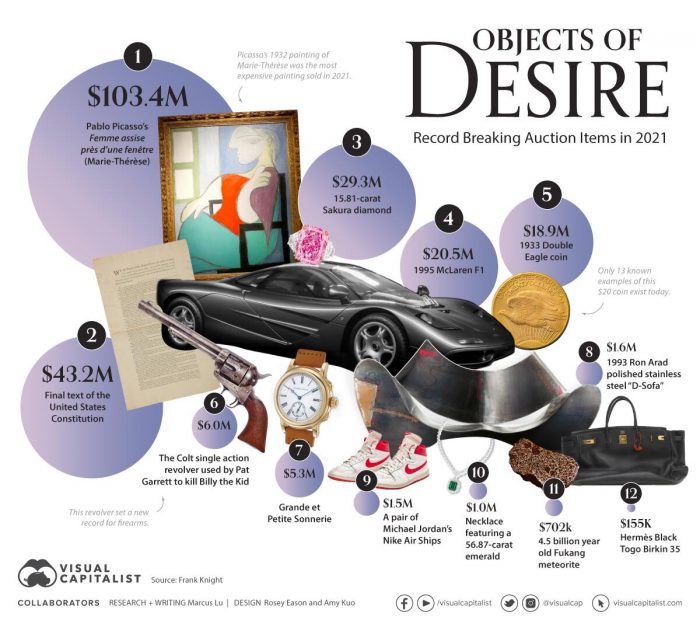 2021 was a record setting year for auctions. With some global instability and an increasing amount of money printing and inflation, the wealthy spent more than ever this year to secure some scarce assets.

At the time, it was a record setting price for a painting sold at auction. The painting, Femme Assise pres d’une fenetre (Marie-Therese Walter) sold for $103.4 million in a Christie’s Impressionist and modern art sale in New York City to an unnamed buyer, who purchased the painting via telephone bid.

Pablo Picasso painted this oil on canvas as a tribute to his then mistress Marie-Therese Walter. Marie-Therese was one of several women he used as inspiration while working on his artwork during the 1930s.

After successfully picking out two other works by Picasso, this final bid officially secured them all with the same anonymous bidder winning each work at auction through telephone bids. Collectively they made up over $160 million worth of artworks sold that evening.

The Final Text of the United States Constitution

The final text of the Constitution sold at auction for $43.2 million. That made it the most expensive legal work ever sold at an auction, just edging out another Picasso piece that was auctioned off last year.

The 15.8 carat Sakura diamond is one of the rarest diamonds in the world and sold for an incredible $29.3 million.

But where did the Sakura come from? Well, according to the New York Times, this stone was originally sourced from the Argyle Pink Diamond mine in Australia by Rio Tinto Group – an international mining company based in London, UK. The mine had been previously known for producing both red and pink diamonds before its recent closure at the end of 2020. From there, Rio Tinto decided to send this unique gemstone to a jewelry manufacturer called Cora International Diamond Company Limited (Isreal) who used its expertise to cut and polish it into its current brilliant round shape.

The Mclaren F1 was developed from 1992 to 1998 and was the first production car to use a carbon-fiber monocoque chassis structure. It featured a central driving position, gold foil used extensively throughout its engine bay as heat shielding, and an engine based on BMW’s S70/2 V12 powerplant with a 6.1-liter capacity producing 618 horsepower at 7400 rpm and 480 pound-feet at 5600 rpm of torque. It has a top speed of 240 mph and can accelerate from 0 to 60 mph in 3.2 seconds before hitting 100 mph in 6.3 seconds (the fastest car at the time).

It is no surprise that this iconic supercar would make such an impact during the auction weekend—its reputation precedes it!

“The 1933 Double Eagle is one of the iconic rarities of the 20th century. This example is also among the very best in quality and historical importance” said Rohan de Silva, president of Sotheby’s Financial Services.

Struck in 1933 but never officially circulated, the coin is made from more than a third of an ounce of gold. Its estimated value was between $10 million and $15 million before the auction started, it ended up fetching $18.9 million.

The coin is one of only 20 remaining 1933 double eagles in private hands; another 50 are kept at Fort Knox.