About to Take a Flight? Reassure Yourself With These Air Safety Stats

I try to do my morbid, paranoid plane crash Googling after I take a flight, but sometimes willpower fails me. The usual cost of this is that I am extra paranoid during takeoff and landing, since those are the most likely times that something is going to go horribly wrong. That’s not so bad, though, since the worst thing about plummeting to your death in an airplane crash would undoubtedly be the plummeting. If something goes wrong when you’re not too high above the ground then you don’t have to fall too far. Much better. (As you can probably guess, I hate rollercoasters.)

Another result of looking for plane crash information is that I get extra, extra paranoid about getting in the car to go to the airport. The odds of dying in a car crash are 1 in 85? That’s terrifying!

I do wish that this infographic had specified how much more likely you are to survive a plane crash if you sit in a seat near the exit, because the difference would have to be pretty darn high before I’m going to shill out an extra 50+ bucks for the privilege of choosing my seat.

Now, why not continue down the chute of paranoia with this lovely bicycle crash infographic?

Sharla
Author
Sharla Kew was born one morning when the sun didn't shine. It came up about 2 hours later.
12.2k 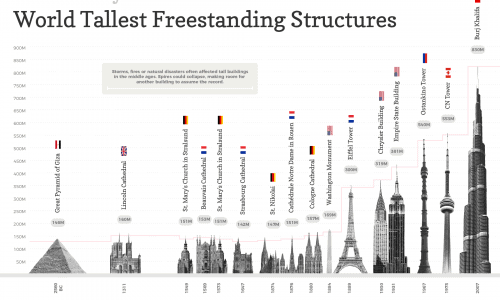 A Race For The “Tallest Building” Title