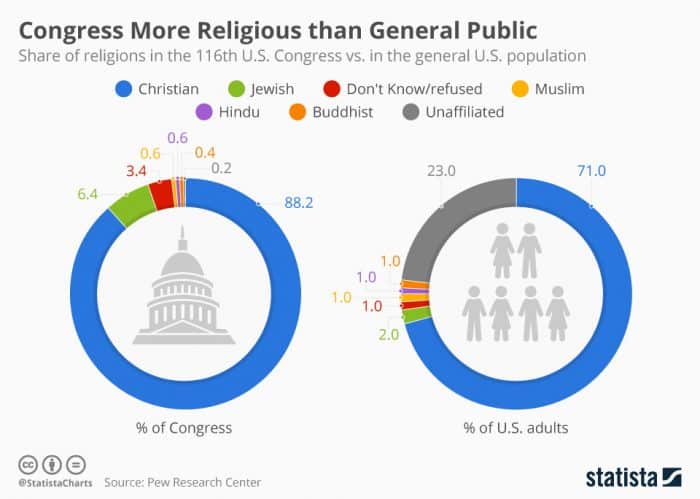 The 116th Congress is known to have the most diverse population of representatives it has ever had. Yet, while Congress is making strides towards increased diversity, they do not reflect the general population when it comes to diversity in religion.

According to the infographic, members of Congress over-represent the Christian population, with 9 out of 10 people identifying with Christianity. What about the many other religions in the United States?

The shocking news is that most—if not all—people working in Congress identify with a religion, with only a couple of people claiming to be unaffiliated. However, when it comes to the general population, almost a quarter of people claim to be unaffiliated with religion. This demonstrates that representatives of the districts throughout the U.S believe and follow a religion more so than the general population as a whole.

For the past five years, members selected into Congress have increasingly become more diverse, especially with gender and racial diversity. Ideally, people want to see representatives of Congress that reflect the general population to ensure each American with a different background is represented on a federal level. However, this push for diversity does not seem to be the case when it comes to religion.