A Robot Could Steal Your Job One Day

You probably feel secure in your job. But what if someone steals your position one day? And not just anyone, but a competitor you won’t ever be able to beat?
Could a robot take your job? Technology makes our lives easier — from personal assistant devices like Siri to ordering a car ride with the touch of a button, it’s invaluable. But that won’t matter much if you end up unemployed because of it.

According to research by Leisure Jobs, robots will eliminate 47 percent of the human workforce by 2035. Leisure’s searchable database of occupations provides a customized infographic for 900 jobs, from animator to zoologist. Need to know if your bicycle repair gig is safe? You can find out here. The example shown on the static infographic is economists, who have a medium chance of becoming obsolete.

The data was collected from the in-depth white paper “The Future of Employment,” a job automation studyfrom the University of Oxford that says intelligent machines are most likely to steal factory jobs and occupations requiring data processing, such as accounting. The safest jobs include social workers and therapists, clergy, and other positions that require a person’s judgment, like being a judge.

This startling infographic may have you scrambling. Whether you’re at the beginning of your career or a seasoned veteran, robots could be coming for you. Learn more about automation in the workforce. 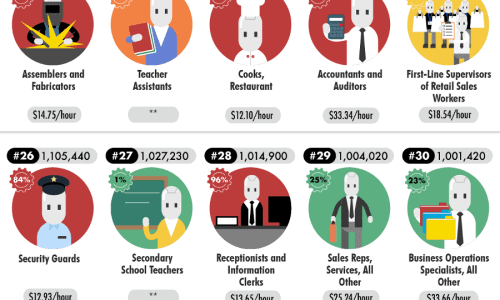