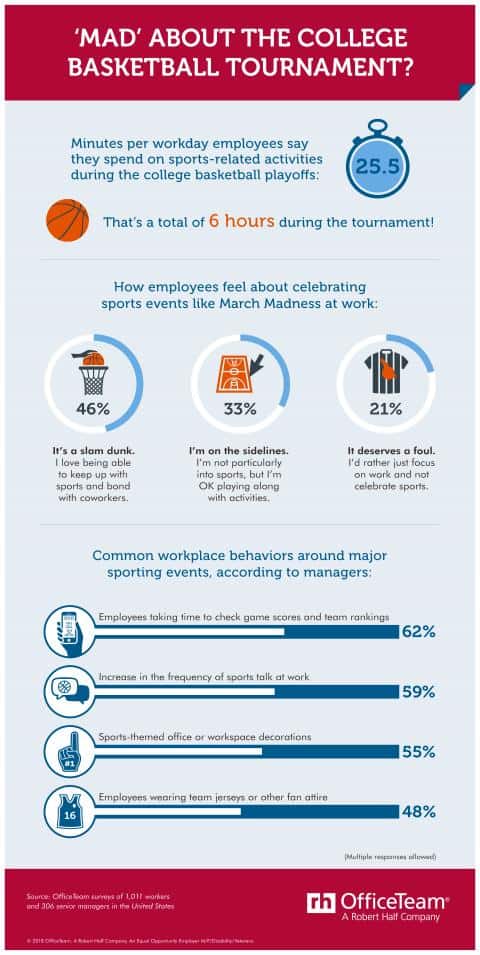 As you may have heard, the college basketball tournament known as March Madness has been canceled until further notice.

Today’s infographic displays the impact of this fabled tournament on the common workplace by showing statistics of workplace behavior during the said tournament.

The research was done by OfficeTeam, who conducted a survey for 1,017 workers and 306 senior managers in the United States to take regarding the effect the March Madness tournament has on the workplace environment.

The survey’s results made it apparent that the college basketball tournament had a sizable effect on overall workplace behavior, with both employees and managers reporting significant changes in behavior every March coming as a result of the March Madness spirit.

Employees were self-reporting that only 21% don't enjoy the March Madness festivities, while 79% either loved or were OK with partaking in the festivities. Meanwhile, managers reported shifts in behavior from increased phone usage (for checking game scores and team rankings) to more sports-themed office or workplace decorations. It is evident that March Madness will make even the most casual sports fan an avid follower…at least for a little bit.

The overall impact March Madness has on the world is undeniable (as these numbers show) and we will no doubt miss its presence this spring, along with other major sports leagues.

Your Employee Is About To Quit: Here’s Why

The Definitive Guide To Control Covid-19 In The Workplace