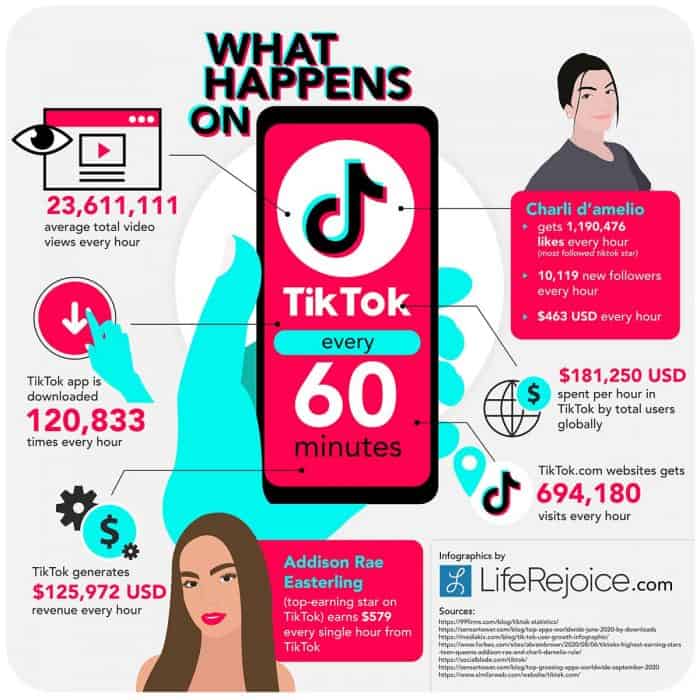 Statistics Show TikTok Is Tik-Taking Over

TikTok hasn’t quite reached the heights of its competitors, but that doesn’t mean they won’t anytime soon. In comparison to YouTube’s average of ~203.3 million views per hour, TikTok averages 23.6 million per hour. TikTok also snatched the titles of most downloaded non-gaming app worldwide in June 2020, and highest-grossing non-gaming app worldwide in September 2020, beating out YouTube. In fact, TikTok is the only global contender to Facebook, being the only app in the top five not owned by Facebook. If you weren’t aware, it’s TikTok season.

This infographic by LifeRejoice also goes into detail about some of TikTok’s high earning creators. Addison Rae leads the list, generating $5 million in 12 months – that’s $579 an hour. However, the only thing Rae is second in is most followers. That title goes to Charli D’Amelio – boasting 92.6 million followers over Rae’s 64.8 million. She also gains 10,119 new followers every hour and has a net worth of $4 million. That’s $463 an hour, enough to be included on Fortune’s 40 under 40 list.

Be sure to check out the infographic for all of the crazy stats. It’s crazy to think how fast TikTok became a household name, and even crazier to think how fast people made careers from it. One thing is certain – it’s either time to learn extensive app development or some very well-choreographed dancing.