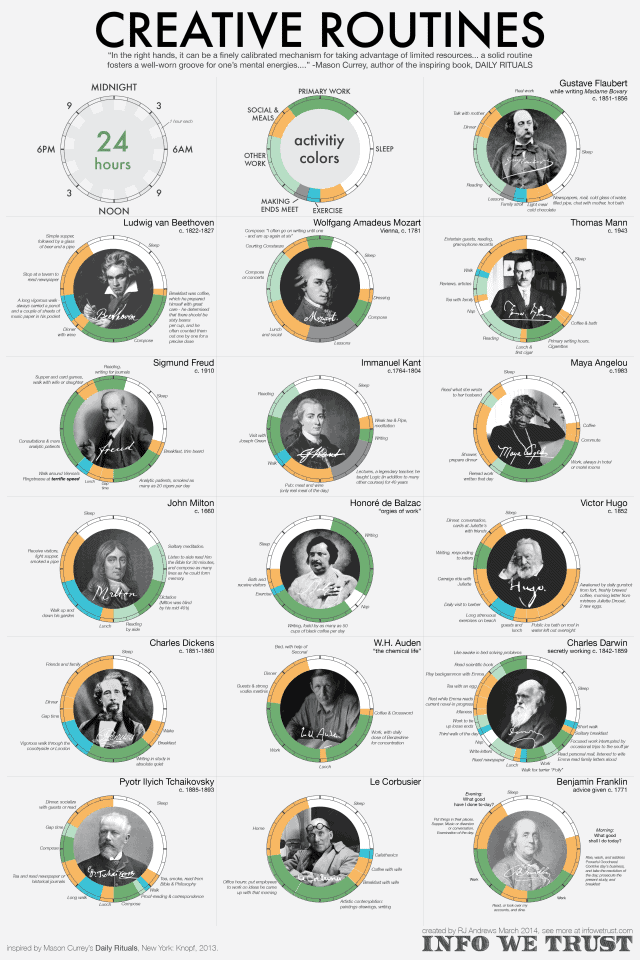 Alright, it's time to stop whatever it is you were doing to look at what old white bearded dudes with fancy hair do with their day. At least the creator of this infographic included Maya Angelou, although it does come off as lukewarm attempt to give it some much needed balance. Regardless, the people that are mentioned certainly aren't irrelevant chumps and there's some pretty interesting information here.

Sure, you can draw a few parallels person to person, but there aren't really any glaringly profound patterns that reveal the secret to creative output. Even though everyone here is an early riser, consider someone like Hunter S. Thompson. If he was on here it would show something along the lines of waking at 3 pm to alternate between cocaine and cigarettes until a marathon of writing from midnight to 6 am. That's a very stark contrast to what you see here yet Hunter was still a fiercely prolific and successful writer. What this infographic is really promoting is that productivity is boosted just by having a routine, whatever it may be. I'm sure though that the benefits of having structure to your day to day life isn't really news to anyone.

Sometimes it seems like histories greatest minds were superheroes. This is a great reminder that they were in fact human just like the rest of us. They perfected their craft by devoting their time to it, which is something we are all capable of.

How To Get More Energy, And That Promotion