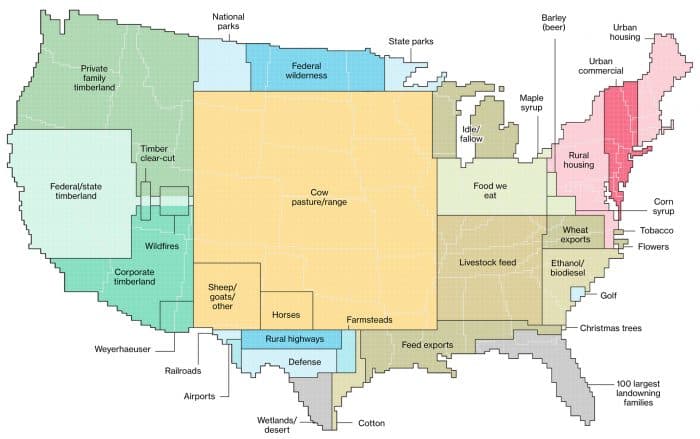 The Way Land Is Really Used Across The U.S

One thing that shocks many European tourists in the US is the sheer amount of space. It's true: America has a lot of room, whether in the width of its streets, the size of people's yards, and above all, its vast rural expanses. If you've ever found yourself thinking, ‘What does America do with all of that space?', this infographic will open your eyes.

According to the U.S. Department of Agriculture's data- gathered through surveys and satellite imagery- the country's land can be classified into six major types: pasture/range, forest, cropland, special use (including national parks, highways, and railroads), miscellaneous (including golf courses and cemeteries), and urban. Of those categories, urban (69.4m acres) and miscellaneous (68.9m acres) take up the smallest area by far, compared to pasture/range (654m acres), forest (538.6m acres), and cropland (391.5m acres).

Those numbers are logical, since urban centers are by their nature dense and small, compared to wide swathes of pasture. In fact, urban areas are so dense that 80% of Americans live or work in one, even though these centers make up only 3.6% of the country's land mass. Some even believe that smart cities are the future, rather than rural living. Seeing these six categories and their subdivisions compared here in one map offers a detailed look into the diversity of the American landscape.