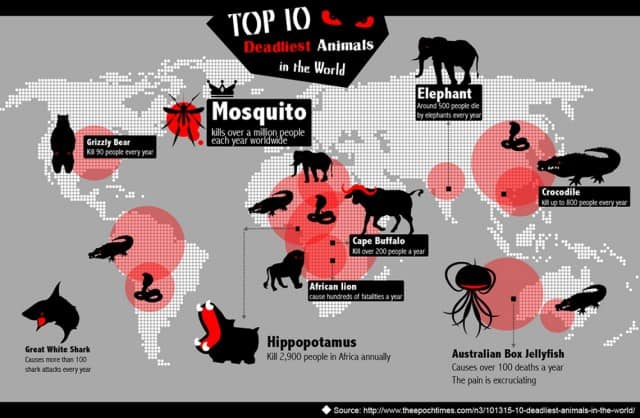 Top 10 Deadliest Animals In The World

It can often only take one episode of Monsters Inside Me to give up traveling. What many don't realize is that the danger doesn't really come from parasites or things unseen, but rather the very popular animals that cartoons have made us adore.

What is surprising to me is that the hippopotamus is so dangerous. Although only found in Africa, they kill close to 3,000 people annually. The Lion King never showed how vicious they are. It wasn't until one of the earlier episodes of river monsters that I realized just how colossal these animals are.

I have never seen a grizzly bear in person but I know they are cute. If I did see one while I was out, I am pretty sure I would be the type to hang around it for a just a little too long. Unfortunately for me, and many others, grizzly bears are the deadliest animals in North America. Of course that is excluding the real killer: Mosquitos.

Mosquitos are responsible for the deaths of over 1 million people world wide annually. With the exception of crocodiles, mosquitos are the animals most frequently found anywhere in the world. Personally, and this probably rings true for most, mosquitos are really freaking scary. You can't really stop them from going anywhere. They are light enough that you usually do not feel them land on you. They carry the blood of another person as they fly. This infographic gives light to the deadliest animal, but also the scariest too… Mosquitos! [via]