How Hot Is The Sun? 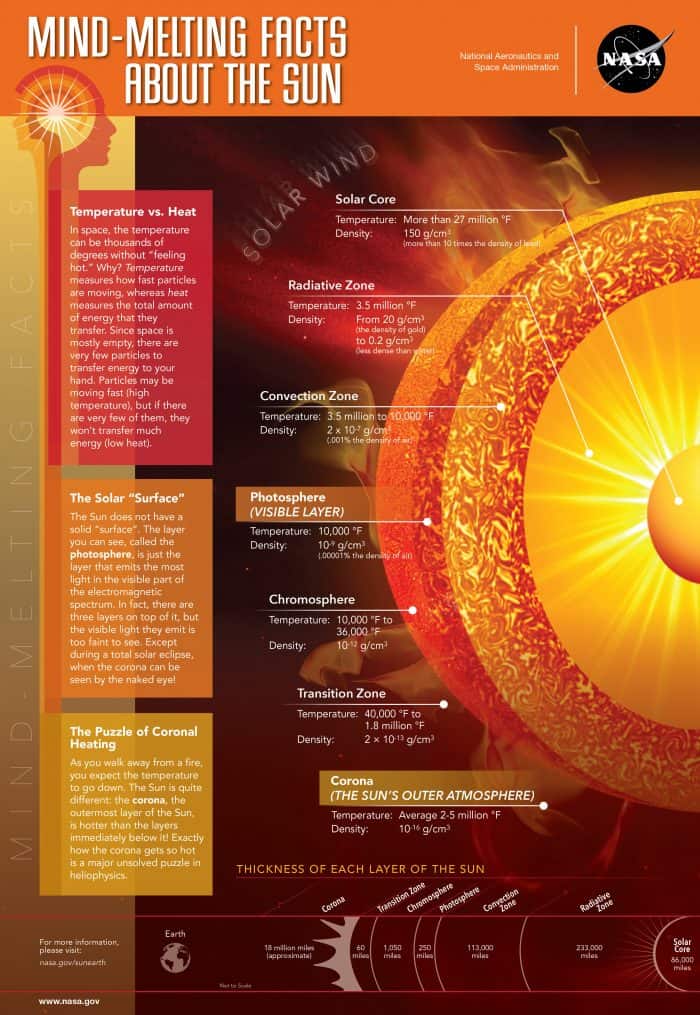 Our solar system’s existence is made possible by the hottest star in town:  the Sun. Through its energy, it has been lighting the way for Earthlings to thrive for millions of years.  Although a great ally, we have to keep our distance, because things get pretty hot up there.

As a true star, the Sun is sizzling to the core.  Just like Earth, it has a hot nucleus, where temps can reach upwards of 27 million ºF.  When it comes to size, however, the Sun’s center is around 57 times bigger than that of our planet.

The next two layers (Radiative and Convective zone) see temperatures cool down to 3.5 million and 10,000ºF.  It’s not beach weather, but certainly a huge drop from the core.

The third layer from the Sun’s nucleus (Photosphere) is the light show that’s visible from our planet.  It’s also the coolest layer at around 10,000ºF. Interestingly, the layers beyond this one (Chromosphere, Transition Zone, Corona) see temperatures increase to about 2.5 million ºF.  Normally, the further we get from a fire, the cooler the temperature. In this case, however, the increase in outer layer temperatures is still a mystery to scientists.

The captain of our Solar System has been a target for exploration for a while.  Luckily, we’re far enough to where we can get away with just a sunburn.

Everything You Need To Know About Cats